For all the details on how to enter the Tea Cosy Competition for 2018, click on the ' Tea Cosy Competition Information' tab, above. Or scroll down past the owl pattern, the information is below that.
Here's the updated version of the dog tea cosy pattern. Enjoy. Please help us in our fundraising effort for the Cancer Council...we're crafting for a cure for cancer. 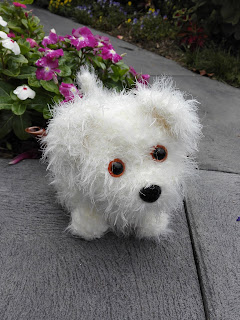 You’ll need 4x50g balls of Passioknit Cassowary, in White.
One pair of 6 mm knitting needles.
(For a less fluffy effect, use 2x50g balls of Cossowary, or other fluffy yarn; plus 2x50g balls of white 8ply wool or acrylic.)
2x double pointed 6mm needles, used for knitting the I-cord for the tail.
2 safety eyes.
A black flock nose.
A small amount of polyester fibre-fill.
The tea cosy measures 20 cm wide and 16 cm high when laid flat.

Stitch the front and back together by joining 2½cm at the base. Leave a 10cm gap each side for the handle and spout, then join across the top.

Using a pair of double pointed needles, and 2 strands of yarn, cast on 3 sts, and work an I-cord for 8 cm.
In case you need reminding of how to do an I-cord, it goes like this......
knit 3, don't turn your work, just push it across to the other end of the needle, and K3 again. Just repeat this for the length required, and cast off.
Attach to the back of the cosy in the marked spot, or where it looks right to you. The tail will curl a little by itself.

Using two strands of yarn, cast on 6 sts. Knit one row. Second row, increase one stitch at each end; 8 sts.
Knit 4 rows.
Start decreasing.
In the middle of each row; decrease one stitch per row until 3 sts remain.
Knit 3 rows. Cast off.
To place the ears, first measure 3cm vertically up from the top of the eye. Pin each ear in position, 3-4 cm above the eye; adjust slightly to give a pleasing appearance. The ears are sewn on with the cast-off edge pointing to the outside of the face; when sewn; flip over.

Cast on 10sts with 2 strands of yarn together, on 6mm needles.
Knit 6 rows.
Cast off.
Join side seams, run a gathering stitch around the top, pull tight; stuff with the tails of the yarns...the paws are little and this is probably enough stuffing. You can add a bit of polyester fibre fill if you think it needs it. Run another gathering stitch around the open end, pull tight to form a ball.
Attach the paws to the front of the cosy at the marked spots.
Copyright © Lorraine Dunbar