This is the revised version of the little white dog tea cosy. 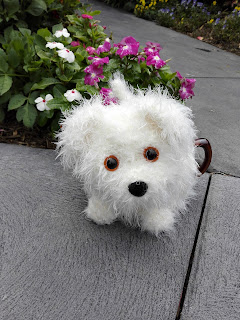 You’ll need 4x50g balls of Passioknit Cassowary, in White. Knit throughout with two strands together.
Alternatively, you could use 1 strand of 8 ply woollen yarn together with 1 strand of fluffy yarn.

One pair of 6 mm knitting needles.

Use two strands of Cassowary worked together throughout the project. This will produce a firm thick fabric; perfect for keeping the tea in your pot nice and warm.


Tie a length of coloured yarn around the thread that lies between the 11th and 12th stitches. This marks the position where the tail will be attached later.


With 6mm needles, and two strands of yarn, cast on 26 stitches.


Knit 2 rows. Mark the positions for paws by tying a length of coloured yarn on the thread between the 9th and 10th stitches, and between the 17th and 18th stitches.
Continue knitting until the work measures 10 cm.
Start decreasing: Row 1. K2, K2tog, K to the last 4 stitches, K2tog, K2.
Row 2.  knit.
Repeat these 2 rows till 22 sts remain.


Tie a length of coloured yarn on to the thread that lies between the 10th and 11th stitches. This marks the position where the centre back of the head will be attached later.


Stitch the front and back together by joining 2½cm at the base. Leave a 10cm gap each side for the handle and spout, then join across the top.

Using 2strands of yarn together, cast on 20 sts.


Continue, knitting every row without shaping until the work measures 6 cm.


Decrease on each row as follows:


Row 6. K2, K2 tog, knit to last 4 stitches, K2 tog, K2.
Repeat this row till 10 sts remain.
K2 tog all along next row, (5 sts)
Cast off. Tie a coloured thread on the middle stitch of the cast off row. This marks the position where the nose is attached.


Fold the head in half, so that the two side edges are together.


With a length of yarn, sew along the outer edges of the work from the nose marker on the cast-off edge, all the way along the side edge. Leave the cast-on edge open. With a 60cm length of plain yarn in a matching colour, sew a running stitch around the cast on edge, leaving it open.


The marker on the cast off edge is the spot to place the nose. The side seam of the work is the lower edge of the head. On the upper side, the eyes and the nose are positioned to form a 4cm equilateral triangle. The markers will help find the approximate spots, but it’s a good idea to make some small adjustments to the positions to give a cute appearance. Attach the nose and eyes.


Using some polyester fibre, stuff the head quite firmly, and close by pulling the ends of the running stitch. Fasten, but don’t cut off the excess yarn. To give the face a bit more shape, with a darning needle, and one piece of yarn at a time, take a small stitch, entering from the back of the head through to the front, next to an eye, on the nose side, and return the needle to the back of the head. Repeat for the other eye. Pull the threads just enough to give the face a friendly expression. Fasten off. The remaining ends of the yarn can then be used to attach the head to the body.


Position the centre back of the head on to the marker on the front side of the body. Squash the head a little with your fingers, and sew onto the body, leaving the top half of the head free.

Using a pair of double pointed needles, cast on 3 sts, and work an I-cord for 8 cm.
In case you need reminding of how to do an I-cord, it goes like this......
knit 3, don't turn your work, just push it across to the other end of the needle, and K3 again. Just repeat this for the length required, and cast off.
Attach to the back of the cosy in the marked spot, or where it looks right to you. The tail will curl a little by itself.

Using two strands of yarn, cast on 6 sts. Knit one row. Second row, increase one stitch at each end; 8 sts.
Knit 4 rows.
Start decreasing.
In the middle of each row; decrease one stitch per row until 3 sts remain.
Knit 3 rows. Cast off.
To place the ears, first measure 3cm vertically up from the top of the eye. Pin each ear in position, 3-4 cm above the eye; adjust slightly to give a pleasing appearance. The ears are sewn on with the cast-off edge pointing to the outside of the face; when sewn; flip over.

Cast on 10sts with 2 strands of yarn together, on 6mm needles.
Knit 6 rows.
Cast off.
Join side seams, run a gathering stitch around the top, pull tight; stuff with the tails of the yarns...the paws are little and this is probably enough stuffing. You can add a bit of polyester fibre fill if you think it needs it. Run another gathering stitch around the open end, pull tight to form a ball.
Attach the paws to the front of the cosy at the marked spots.
Posted by Craft a cure for cancer at Friday, June 10, 2016